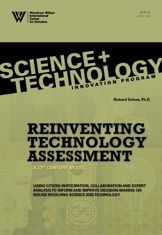 WASHINGTON—A new report from the Science and Technology Innovation Program at the Woodrow Wilson International Center for Scholars defines the criteria for a new technology assessment function in the United States. The report, Reinventing Technology Assessment: A 21st Century Model, emphasizes the need to incorporate citizen-participation methods to complement expert analysis. Government policymakers, businesses, non-governmental organizations, and citizens need such analysis to capably navigate the technology-intensive world in which we now live.

The U.S. Congress set a global precedent in 1972 when it created an Office of Technology Assessment (OTA), but then reversed course in 1995 by shutting down the OTA. In the meantime, 18 European Technology Assessment agencies are flourishing and have pioneered important new methods, including Participatory Technology Assessment (pTA). By educating and engaging laypeople, pTA is unique in enabling decision-makers to learn their constituents’ informed views regarding emerging developments in science and technology. pTA also deepens the social and ethical analysis of technology. European pTA methods have been adapted, tested, and proven in the U.S. at least 16 times by university-based groups and independent nonprofit organizations.

“We style ourselves as living in a ‘technological society’ and an ‘information age,’” notes report author Dr. Richard Sclove, “yet we lack adequate information about – of all things! – the broad implications of science and technology.”

As the pace of technological change quickens and the Obama Administration moves forward on its Open Government Initiative, the time is ripe to institutionalize a robust national TA capability incorporating both expert and participatory TA methods. The Internet and social networking capacities make it possible to organize such an endeavor on a distributed, agile and open basis, harnessing collaborative efficiencies and supporting broad public engagement.

“In the 15 years since OTA was closed, TA has progressed significantly in Europe. It is time for the U.S. to institutionalize a serious, continuous and nonpartisan capability to assess the broad social, ethical, legal, and economic impacts of emerging science and technology in areas such as nanotechnology, biotechnology, and earth systems engineering,” said David Rejeski, who directs the Wilson Center program.

In the report, Dr. Sclove recommends creating a nationwide Expert & Citizen Assessment of Science & Technology (ECAST) network that will combine the skills of nonpartisan policy research organizations with the research strengths of universities and the public outreach and education capabilities of science museums. Founding partners in ECAST include the Science and Technology Innovation Program at the Wilson Center,, the Boston Museum of Science, Arizona State University, ScienceCheerleader, and the Loka Institute.

The report can be downloaded at http://www.wilsoncenter.org/techassessment