Synthetic Biology on the Rise 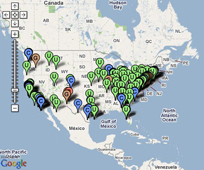 WASHINGTON — Over 170 businesses, research groups and other organizations are involved in the emerging field of synthetic biology throughout the United States, according to a new interactive map launched today by the Synthetic Biology Project at the Woodrow Wilson Center. This resource, powered by Google Maps® and available online at www.synbioproject.tech/map, shows clusters of activity are appearing in states like California, Massachusetts, New York and Texas.

“We saw similar growth patterns with nanotechnology a few years ago,” said David Rejeski, who directs the Synthetic Biology Project at the Woodrow Wilson Center. “Like nanotechnology, synthetic biology is an enabling technology and will likely spawn a new generation of products and industries built on our ability to manipulate matter at a molecular level.”

Though a recent poll by Hart Research showed that 9 in 10 Americans have heard little or nothing about synthetic biology, experts predict the emerging technology could become a powerful economic driver. The Utah-based life sciences firm, Beachhead Consulting, estimates that the synthetic biology research market (presently worth around $600 million) has the potential to grow to $3.5 billion over the next decade, while current estimates by the independent research and advisory firm Lux Research indicate that one-fifth of the chemical industry (now estimated at $1.8 trillion) could be dependent on synthetic biology by 2015.

Through engineering organisms at the molecular level, synthetic biology could revolutionize the production of new drugs, biofuels and other substances. “This is a tremendously exciting area of science and technology,” said Andrew Maynard, the Project’s Science Advisor. But he added that, “the path forward toward successful, safe and accepted applications of synthetic biology is not clear. Consumer attitudes and oversight will play important roles in defining market outcomes, especially internationally.”

The analysis also looked across the Atlantic, where 51 synthetic biology-related organizations were identified in Europe. The European Union has already invested around 30 million Euros in synthetic biology research.

• Putting Nanotechnology on the Map
• The Rise of the Molecular Economy